While luxury real estate developers are known for focusing on pleasing their residents with perks and flourishes, the minds behind 555TEN are also paying particular attention to canine companions. The rental apartments at 555TEN in Midtown feature a plethora of amenities for resident pooches, including a partnership with Throw Me A Bone, the at-home pet-care service used by celebrity hounds, including Sting’s pup Compass. Residents will be able to take advantage of the building’s 2,000-square-foot landscaped dog run, pet washing station, and, most importantly, the on-site veterinary and grooming services. The dogs of 555TEN will be so well cared for that their owners might get a bit jealous, although they can always bowl a frame or two in the building’s two-lane alley to take the edge off.

The luxury rental Midtown apartments at 555TEN have just hit New York’s real estate market and will soon welcome their first residents. The Extell-developed tower’s residences range in size from lofts to three bedrooms and are outfitted with washers and dryers, built-out closets, and oversized windows offering stunning city views. The building’s 30,000 square feet of amenity space provides ultra-luxe extras like a rooftop pool and cabanas, a fitness center with an indoor saltwater pool, a children’s playroom, and a bowling alley, arcade, and covered dog run. 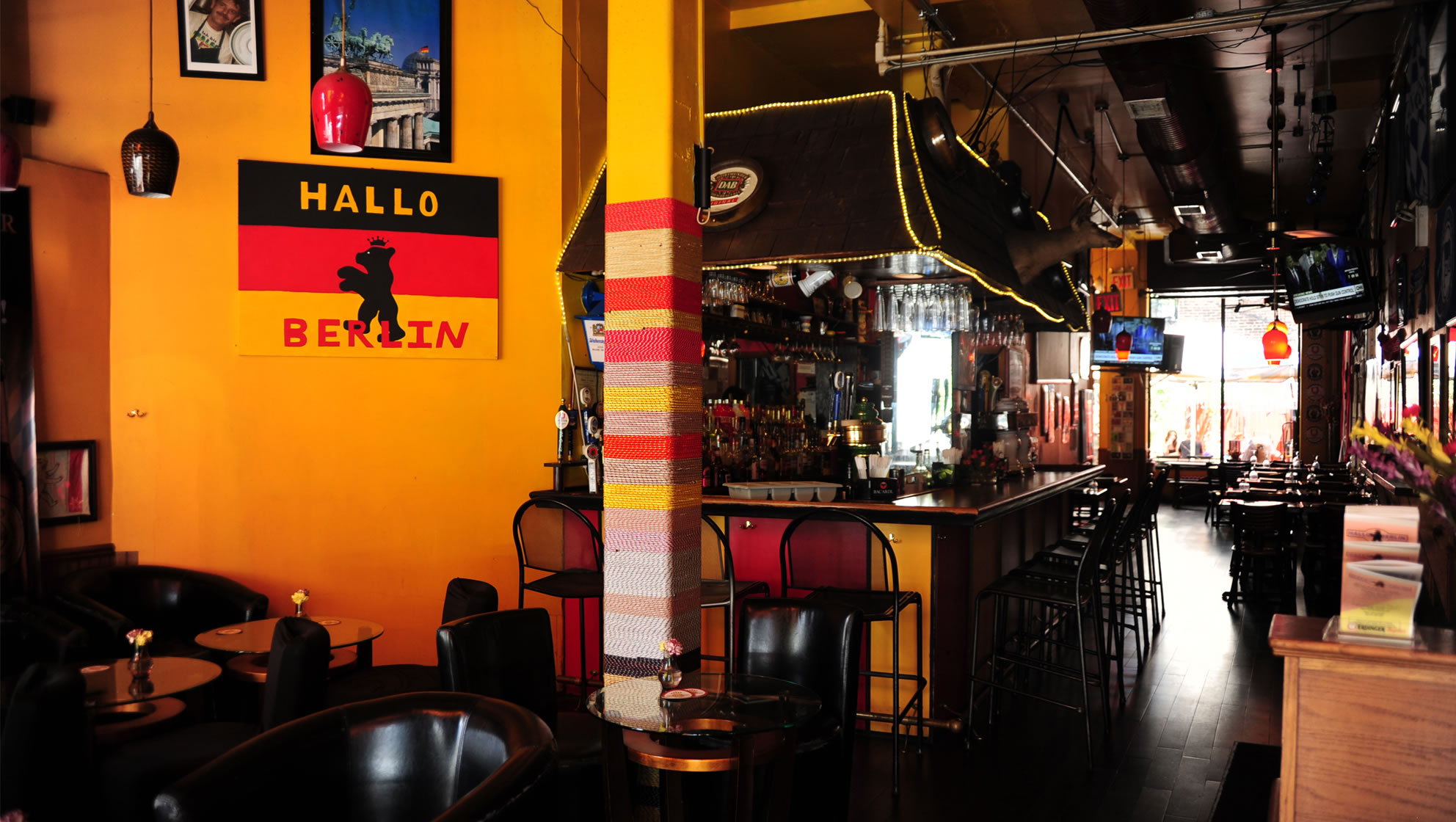 Rising over Hell’s Kitchen with views of the Hudson River, the luxury apartment rentals at 555TEN place their residents in a city where countless cultures can be experienced in the midst of Midtown West. This fall, residents of 555TEN can celebrate their own New York City version of the traditional Oktoberfest. In fact, with so many German beers and specialties in or near Hell’s Kitchen, you can enjoy Oktoberfest well into the winter—or any time of year—without having to fly to Germany.

Start the weekend at Hallo Berlin, one of New York Magazine’s favorite German restaurants in the city, where the atmosphere couldn’t be more authentic. Grab a leather seat near the bar in the dining room that’s decked out in the colors of the German flag, or come with friends and take over one of the large tables in the back garden—and feast on founders Rolf and Bernadette Babiel’s signature wienerwurst, bratwurst, knockwurst, and bockwurst, all served with the full range of appropriate accompaniments: red cabbage, sauerkraut, onions, and mustard.

Make Valhalla another stop on your Oktoberfest tour of Hell’s Kitchen to sample what’s on tap at what Thrillist named one of the best beer bars in New York City; according to Thrillist writer Chris McClellan, he’s “never been to Valhalla and not geeked out with” another customer. With 48 beers on tap, this really is a beer lover’s heaven, where the spirit of Oktoberfest will encourage you to try each of the Oktoberfest-appropriate brews, including the Abita Oktoberfest, Ayinger Oktober Fest-Marzen, and the Bell’s Oktoberfest, which the menu describes as having “herbal hop aromas” that will transport you to the Black Forest.

Another local, not-to-be-missed Oktoberfest destination is the Times Square Oktoberfest, coming October 30th, which will feature arts, crafts, and food all day from 10 am to 6 pm. Although this may be one of the last local events of the “official” month of Oktoberfest, it does not have to signal an end to the festivities.

Move a little farther south to neighboring Chelsea, and you can end the night back at the river at the Standard Hotel Biergarten, where Chef Kurt Gutenbrunner serves sausages and beer underneath the High Line. For a truly decadent Oktoberfest finale, you can reserve a special table called a “Stammtisch” that allows you and your friends to get your own beer from three of its built-in taps.

Throwing your own Hell’s Kitchen Oktoberfest is a great way to enjoy not only German culture, but the diversity and excitement of NYC. Residents of 555TEN will have no excuse not to say “hallo” and celebrate, German-style.

New photos of Extell’s forthcoming high-rise apartment building reveal a jaw-dropping array of amenities at the 56-story residential tower. 555TEN will bring 478 luxury apartments to Midtown West, with more than 30,000 square feet of amenities to pamper its residents, including a suite of recreational options like a bowling alley and two saltwater pools. Residents will also be able to unwind at the rooftop club or lounge in the cabanas on the sundeck, all while taking in views of the Hudson River and the city skyline. Pets are catered to with a covered dog park and on-site doggy day care, while kids can let loose in the playroom or with a game of Pac-Man at the arcade. And with a building-wide Wi-Fi network that runs as fast as a fiber connection, residents can stay connected anywhere they go in the building.